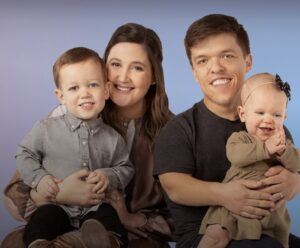 We’ve got some huge news from a key cast member on Little People, Big World.

According to Tori Roloff, not only has this long-running TLC reality show been picked up for a new season… but said new season is already filming!

The mother of three actually used one of her kids to alert fans to this development.

In a very cute and precious way, that is.

Earlier this week, Tori posted a snapshot on her Instagram Stories page of her and husband Zach’s youngest child, Josiah, lying on his belly in a lounger on the floor.

The thee-month-old was positioned next to camera wires as he slightly lifted his head for the photograph.

Tori even captured a cameraman in the background, where multiple cameras were set up for filming, and she wrote as a caption:

“There’s a new producer in town!”

Pretty much says it all, doesn’t it?

During an Instagram Live session, Amy Roloff said simply: “Because we are filming, I’m assuming that there will be another season.”

The family matriarch didn’t specify a premiere date or even confirm that TLC had given new episodes a green light… but we’ve now had TWO confirmations that shooting is underway.

And we’ve read these confirmations amid a surprising family feud between members of the Roloffs.

Back in May, Matt announced he was selling 16 acres of the farm he now owns by himself.

The decision was met with extreme backlash, especially from son Zach, who pushed back against his dad’s claim that Zach had been given an opportunity to buy the property himself.

Zach trashed his father as cowardly and manipulative and said Matt is always “blaming others” for his own actions.

Zach went on to write that Matt has been “dragging the family drama that he created and then manipulate[d] the fan base to make himself come out okay,” adding this summer:

“This post his a new shocking low of cowardice and manipulation of his family and kids for his own gain.”

Tori, for her part, has mostly stayed out of this drama, which will assuredly be featured on Little People, Big World down the line.

But Amy? She’s had plenty to say about it.

“It will be sad to see a for sale sign, because it’s not going to any of my kids. It’s going to a stranger,” Amy said in a confessional on the most recent season finale of her ex-husband putting the farm up for sale.

Amy used to own a parcel of this land herself, but sold it to Matt in 2019.

“The dynamics of the family will definitely change,” Amy added at the time, more or less teasing storylines to come on Little People, Big World Season 24.

Olivia Wilde Reportedly Called Out Jason Sudeikis For the ‘Aggressive’ Way He Served...