Donald Trump‘s beloved home at the Mar-a-Lago resort in Florida has been raided by the FBI. The law enforcement outfit did not initially disclose the reason for the raid. Reports have since come out that it has to do with Trump’s handling of classified documents and sensitive material during his time as President. Regardless, the former Prez [...] Read More... The post Donald Trump Freaks After 'Large Group' Of FBI Agents Raid Mar-A-Lago Home For 'Classified Material' appeared first on Perez Hilton. 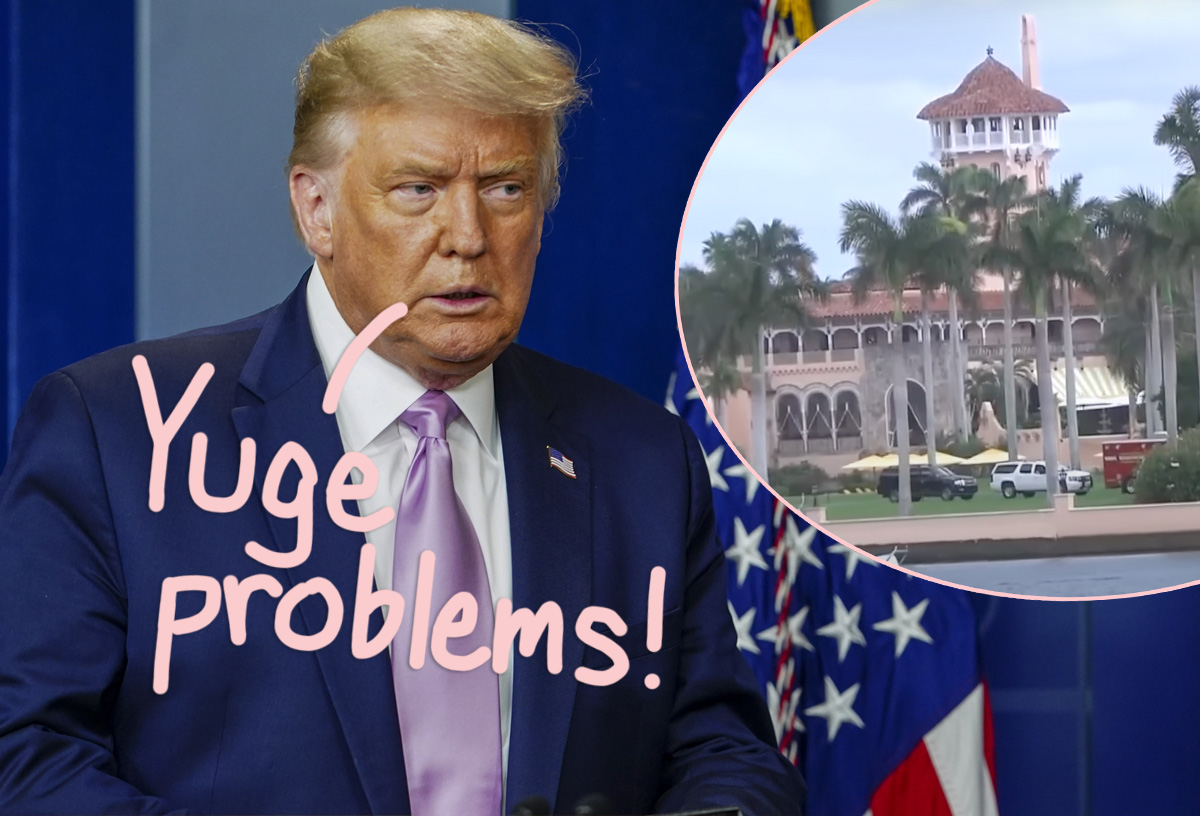 Donald Trump‘s beloved home at the Mar-a-Lago resort in Florida has been raided by the FBI.

The law enforcement outfit did not initially disclose the reason for the raid. Reports have since come out that it has to do with Trump’s handling of classified documents and sensitive material during his time as President. Regardless, the former Prez and his team have been left shocked after law enforcement officials stormed the property.

The raid took place on Monday when a group of agents executed a search warrant at the resort in Palm Beach, Florida. Early on Tuesday morning, NBC News and other outlets confirmed the raid was related to searching for “classified material that belongs to the National Archives.” Once inside, FBI officials reportedly searched the entire property for what they were seeking. They even broke into Trump’s safe to do it!! Gotta do what you gotta do…

According to CNN, Trump was not present in Florida at the time of the raid. Still, it really got to him. In a crazy, meandering statement sent out later on Monday, the Celebrity Apprentice alum wrote in part:

“These are dark times for our Nation, as my beautiful home, Mar-A-Lago in Palm Beach, Florida, is currently under siege, raided, and occupied by a large group of FBI agents. Nothing like this has ever happened to a President of the United States before. After working and cooperating with the relevant Government agencies, this unannounced raid on my home was not necessary or appropriate. It is prosecutorial misconduct, the weaponization of the Justice System, and an attack by Radical Left Democrats who desperately don’t want me to run for President in 2024…”

The “prosecutorial misconduct” remark is an interesting one, considering Trump himself is the one who appointed current FBI Director Chris Wray to his position back in 2017. Sad trombone!

The Donald went on to take a shot at Hillary Clinton‘s handling of emails prior to their 2016 election battle. (It’s been six years since the election, dude. Let go of Hillary already!) He also dropped another “s**t hole countries” type remark, while sharing the detail about the safe:

“Such an assault could only take place in broken, Third-World Countries. Sadly, America has now become one of those Countries, corrupt at a level not seen before. They even broke into my safe!”

According to People, who spoke to an insider present at the raid, “the mood was pure shock.” Well, yeah! We’ve never been raided by the FBI, but we have to imagine we’d be just as shocked!!

Related: Donald Trump Will Do ANYTHING For A Tax Break! No, Seriously! This Is CRAZY!

This may be the first time the FBI has raided Trump’s compound, but the National Archives issue isn’t a new one. Back in February, the National Archives and Records Administration confirmed they sent a team to Florida to retrieve more than a dozen boxes of sensitive documents and other classified material from the former President. At the time, the agency stated those materials should have been handed over for record-keeping at the end of Trump’s presidency, but were not. In their February statement, the NARA added:

“Former President Trump’s representatives have informed NARA that they are continuing to search for additional Presidential records that belong to the National Archives. As required by the Presidential Records Act (PRA), these records should have been transferred to NARA from the White House at the end of the Trump Administration in January 2021.”

So based on that, and NBC News‘ raid reason confirmation (above), it would seem Trump is in trouble for how he handled sensitive materials!

Over on Fox News, right-wing TV personalities struggled to deal with the thought of real-life consequences coming down on The Donald. Radio personality Mark Levin made an appearance on Hannity on Monday night, and told eponymous host Sean Hannity how he felt about the raid:

Dude… Seriously?!?! Thankfully, over on Twitter, people had refreshingly funny and wacky takes on this historic situation:

The FBI director who approved the raid of Mar-a-Lago was appointed by Trump.

This fall, from the party that brought you LOCK HER UP, comes How Dare the FBI Investigate Politicians…

Thoughts and prayers for all the ketchup bottles at Mar-a-Lago.

Sure, sex is great, but have you ever experienced rich powerful men being held accountable for their actions?

Y’all ever laugh so hard that you cough up a little piece of lung? Cause this nearly killed me pic.twitter.com/YTii3BC3ag

the fbi inside mar-a-lago pic.twitter.com/YPyV1dp2eK

They went to Whataboutism in record time … pic.twitter.com/enVmwI8IWY

We are getting VERY sick of living in unprecedented times right about now. LOLz! (But, like, seriously…) Reactions, Perezcious readers??

The CRAZIEST Cheesecake I Have Ever Eaten! By Jose Andres - At Jaleo Las Vegas!